Posted on February 1, 2018 by etopiapress 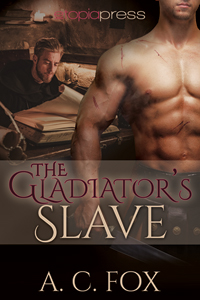 To master this man, he must fight for his trust…

Mikel Vaughn became a slave the night the Boa Visk burned the Grand Library of Amberseth and locked him in chains. The Boa Visk, brutal overlords who have conquered much of humanity, bring the young librarian to Gesh and sell him to the highest bidder. After he’s purchased by a Boa Visk noble, Mikel fears he’ll be forced to submit to the cruel whims of a vile master. Instead, he’s given as a reward to gladiator Bastion Hask for his latest victory in the fighting pits. Mikel is even more outraged to be owned by a human, swearing he would rather die than live as Bastion’s bed slave. But the soft-spoken gladiator doesn’t seem want a slave at all, much less him. Soon Mikel finds it increasingly difficult to hate an enemy who offers him kindness instead of punishment. Mikel will never trust again until he is free, and yet his new master may not be the one keeping him enslaved after all…

Bastion Hask has never lost a match, not even against the twisted monsters he battles at the command of his owner. He’s come to accept his life trapped in the arena, doomed to fight and die for the excitement of the crowds. He doesn’t need or want the slave his noble-born owner has tossed to him like a scrap of meat. Although the young scholar is handsome enough, he seems too weak to survive in this merciless city. Yet Bastion soon finds himself protecting the other man, even putting himself at risk when for years he’s only focused on his own struggle to survive. Mikel’s determination to find a way free of his chains shakes Bastion’s fatalism and rekindles a yearning for freedom he’d lost long ago. As danger relentlessly closes in, their fight to survive becomes a struggle for love and freedom that cannot be denied.

Etopia Press is an electronic publishing house dedicated to readers and authors. We're looking for the best, most unique, most well-crafted stories out there -- and we know they're out there. By taking advantage of emerging electronic markets and media, as well as existing online and print opportunities, we can provide readers with a wider variety of books and ideas, and give authors an opportunity to get the best editing and cover art in the business. The only requirement: the book has to be good. Good plots, interesting characters, engaging conflicts, well-crafted prose. Write a good book, and people will want to read it.
View all posts by etopiapress →
This entry was posted in Etopia Press, fantasy romance, M/M Romance, New Releases and tagged a.c. fox, fantasy romance, gay fantasy romance, m/m fantasy romance. Bookmark the permalink.
%d bloggers like this: