Bailey Castillo is having a horrible Halloween. First, she was fired from her job for no reason by her boss, Doug “the Douchebag” Duchene. Then her friend Ana and her hook-up ditched her at Club Estrella, the exclusive nightclub on Miami’s swanky South Beach, leaving the big, beautiful Bailey all alone in her Cat Woman costume with no one to dance with and nothing to do. And now she’s drawn the attention of the creepy guy in the cheesy Batman suit, who won’t take no for an answer.

That’s when she hears the deep, sexy voice behind her—“There you are, precioso mio, I’m sorry I’m late…”—and turns around to face the hottest, sexiest, biggest version of the Terminator she’d ever seen. What else was she supposed to do but reach up and kiss him? And when she can’t quite pull her lips from his, and he doesn’t pull away either, it isn’t as if she can help it. After all, he was rescuing her from Batman. It would be ungrateful not to let him finish his rescue…

But the Terminator—the hot, Latino Diego Rio—wasn’t alone. He was there with Noah Wilson, the sexy, blonde male-model type, and the vibes they’re sending out suggest they want her. Both of them. Together. Bailey’s never had a threesome before, but after the day she’s had, a ménage a trois with the gorgeous blonde limo driver and his sexy Cuban lover might just be the universe’s way of making it up to her. But when they take her home to the palatial penthouse condo on the beach, Bailey realizes things might not be what they seem, and her two bad-boy lovers might not be who she thinks they are. But how can she think about all that when the sex is just so good…? 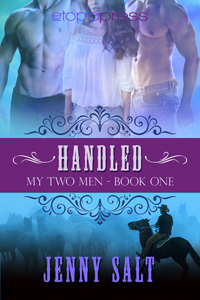 Kayla might be new to ranching, but she does love her men in twos.

When a mysterious girl shows up battered and bruised on the ranch’s doorstep, Tuck and Ben immediately spring into action. The two Wyoming ranchers tend to her physical wounds, but Kayla has other wounds to heal, and the boys have a ranch to run. And running that ranch just got a whole lot more difficult with a sexy distraction like Kayla staying with them…

Kayla wants to make the ranch a home. Sure, she has a lot to learn, but she’s never been afraid of hard work. And there are not one, but two gorgeous men here. Just what she secretly likes best. Tuck believes she can be a part of the ranch family, but convincing Ben is proving far more difficult than she imagined. The man claims she’ll only slow them down and cause problems, but she can see something else in his gorgeous green eyes—ghosts of the past, and a tragedy he can’t seem to overcome.

Kayla’s not afraid to go after what she wants, including her two new men. But with all the secrets of Ben’s past haunting them, and her own past following her to the ranch and threatening her happiness, there may be too may wounds for their love to heal…

With these two alphas, a curvy girl will need all the luck she can get.

Michelle Ross always brings her lucky charm bracelet along for the ride when she’s chauffeuring shifter clients for Mirage Confidential. So when a bodyguard refuses to let her onto the luxury jet where she’s supposed meet her client, the billionaire werewolf Aaron Duval, she’s forced to get creative. And ends up barging in on one of the sexiest things she’s ever seen. Aaron Duval and Jackson Smith, two drop-dead gorgeous males, are locked in a passionate kiss no one else was supposed to witness. Now there’s going to be consequences. Too bad this time she left her lucky bracelet behind in the limousine…

Alpha Aaron Duval can’t believe things have gone this wrong. Even though he runs successful security firm providing bodyguards for the rich and powerful, one beautiful human woman has just evaded his guards and crashed his kiss. A kiss with his business rival and ex-lover, Jackson Smith, a man Aaron’s wolf still considers his mate. Now Jackson is claiming the human is a spy, that Aaron is plotting something underhanded, and he’s demanding a hearing before the High Shifter Council. In Chicago. Tonight. Oh, and the curvy chauffeur? Jackson’s practically kidnapped her to stop her from talking to the media about their kiss. One thing is certain—this is no way to impress a woman his wolf is also claiming as a mate.

Jackson knows right away the hot little BBW is two things: his mate and big trouble. Even if she’s not a reporter, he can’t risk her selling the story of him kissing his business rival to a gossip rag right before he expands his security company. Unfortunately, that leaves him in conflict with his inner wolf. The stubborn beast believes both his ex-lover Aaron and Michelle are his mates. But Jackson’s not above pulling out every trick in the book to win. He has that alpha pride after all. And if that means a fight in the ring with Aaron to prove himself right, well, he hasn’t trained half his life as a mixed martial artist for nothing…

Etopia Press is an electronic publishing house dedicated to readers and authors. We're looking for the best, most unique, most well-crafted stories out there -- and we know they're out there. By taking advantage of emerging electronic markets and media, as well as existing online and print opportunities, we can provide readers with a wider variety of books and ideas, and give authors an opportunity to get the best editing and cover art in the business. The only requirement: the book has to be good. Good plots, interesting characters, engaging conflicts, well-crafted prose. Write a good book, and people will want to read it.
View all posts by etopiapress →
This entry was posted in Etopia Press. Bookmark the permalink.
%d bloggers like this: