In an uncertain future where the Impures—genetic defectives—are banished to a ghetto territory, Detective Ina Stone and her rookie partner, Sam Fujimoto, constantly fight for survival. But when a murdered Impure is discovered in the projects with only a business card in his pocket, the clues lead them into the shadowy underworld of black market trade and human trafficking. After Sam is kidnapped by the Yakuza crime syndicate, Ina must hide her own defect to go undercover as a human trafficking victim. Accompanied by a Tebori master and a new detective with her own secrets, Ina must find a way to free Sam without exposing his role in the investigation, or getting herself killed in the process. 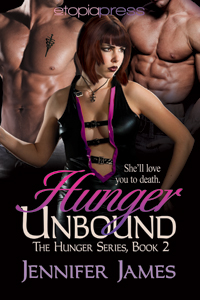 She’ll love you to death…

Miranda Thibodeaux has one goal: save her kidnapped best friend from Adrian Kaiser: masochist, Incubi king, and the vampire Miranda’s father intended for her to marry.

When the Vampire Council has her arrested and tortures her mate, Daniel, Miranda realizes she’s got bigger problems to deal with than a forced marriage contract and a kidnapping. The Council needs Miri to help return fertility to the vampires, and they’ll use any means necessary to ensure her compliance.

Escaping the Council’s clutches, politicking with Celtic goddesses, and surviving demon attacks isn’t the least of Miri’s problems. Thwarting a ghost with deadly intent, she finds out her best friend Anna has a magical genetic pedigree linking her to powerful beings. But when Miri’s Hunger is ripped from her body, it takes physical form, draining everyone it can with reckless abandon, and Miri grows weaker by the moment. It isn’t long before everyone realizes that if Miri and her magic aren’t reunited, they’ll both be doomed.

With the goddess Babd assembling an army of the dead to combat rogue Empaths and demanding Miri’s participation in battle, assassination attempts, and a dead demon bleeding in the living room, Miri has to find help, and fast. Unfortunately, there’s only one person she can turn to who can keep the Hunger controlled until they can be reunited in one body: Adrian Kaiser: masochist, Incubi king, and the vampire Miranda’s father intended for her to marry… 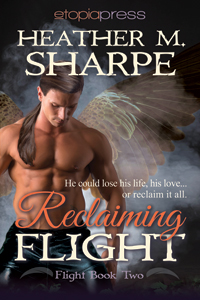 He could lose his life, his love…or reclaim it all.

Twenty years ago, Cedric found his mate’s dead body in a heap at the base of a cliff. Ever since, he has dedicated what’s left of his life to serving the Council. But after a lifetime of being their Enforcer, he’s finally had enough and has asked to be released from his duties. One last job, one last innocent to protect, and then he can disappear.

Until a mysterious woman in the woods offers him something he never dreamed he’d get: a chance to reclaim the love he thought he’d lost forever.

Cedric is overjoyed at a chance to have Taryn back and jumps at the offer. But his last assignment won’t leave him alone to rekindle their relationship. With a warning that Taryn’s time could be limited, and with a dangerous stalker on the loose, Cedric must try to unravel the mystery behind Taryn’s accident twenty years ago. If he plays it wrong, he could lose his love, his career, and his life…or reclaim it all.

Etopia Press is an electronic publishing house dedicated to readers and authors. We're looking for the best, most unique, most well-crafted stories out there -- and we know they're out there. By taking advantage of emerging electronic markets and media, as well as existing online and print opportunities, we can provide readers with a wider variety of books and ideas, and give authors an opportunity to get the best editing and cover art in the business. The only requirement: the book has to be good. Good plots, interesting characters, engaging conflicts, well-crafted prose. Write a good book, and people will want to read it.
View all posts by etopiapress →
This entry was posted in Erotic Romance, Etopia Press, Mystery, New Releases, Paranormal Romance, Romance, Suspense, Urban Fantasy and tagged An Ina Stone and Sam Fujimoto Mystery, Heather M. Sharpe, Hunger Unbound, Jennifer James, Liah Penn, Pure Justice, Reclaiming Flight, Romance, The FLight Series, The Hunger Series. Bookmark the permalink.
%d bloggers like this: