Posted on September 5, 2015 by etopiapress

Conspiracy, murder, and magic…and the death of all they hold dear. 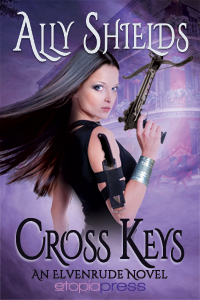 When the first wanderer—a common elf who isn’t authorized to use the portal—is spotted on the streets of New Orleans, the king assigns Kameo Ryndel to assist in the elf’s capture. But before she can intervene, humans with guns shoot the wanderer and steal his body. When Seth Lormarc, an Elite elf from a rival guild, appears at the scene, Kam suspects he is involved.

Seth Lormarc is in New Orleans to find out who was behind the portal breach, and his best lead is the intriguing Kam Ryndel. When he stakes out her apartment and finds her sneaking out in the middle of the night, dressed in black and leaping to the top of the nearest building, he knows there’s something unique about the beautiful elf. That kind of feat requires magic. Ancient magic.

As their paths cross during their investigations, they develop an irresistible attraction, although there’s little time for romance. The portal breach is tied to an illegal smuggling operation that has come to the attention of the human CIA. But the stakes are raised when Kam and Seth discover a band of conspirators and a rebellion deep in Elvenrude that promises nothing except destruction of their world.

If everyone keeps secrets, no one will survive…

Six months after the nightmare in Cross Keys, Kam Ryndel is enjoying her freedom in New Orleans and doesn’t miss the constraints of Elven society. She’s immersed herself in working missions for the CIA, even if it means less time to spend with her boyfriend, Seth. Seth’s not so happy about that. Having shouldered the responsibility of his family’s obligations, he’s losing patience with Kam’s lack of commitment to her own—and to him.

Then a guild worker is attacked by an invisible assailant, and everyone suspects another portal breach by rogues from Elvenrude. As Kam and Seth look for answers, a gang-related CIA mission interrupts the investigation, and Kam is taken to a place she never knew existed—beyond the Louisiana bayou.

Angered by Kam’s new mission, Seth enlists the help of his cousin Rhyden to solve the mysterious guild-worker attack. Instead of an assailant, they discover reports of ghost sightings all over town. Not that unusual for New Orleans, but these seem…different. In a mission complicated by gangsters, feuds, failing magic, and old enemies—and the uncertain loyalty of the Elven king—Seth learns something even worse. Kam is missing. And he isn’t sure if she’s alive or dead…

Etopia Press is an electronic publishing house dedicated to readers and authors. We're looking for the best, most unique, most well-crafted stories out there -- and we know they're out there. By taking advantage of emerging electronic markets and media, as well as existing online and print opportunities, we can provide readers with a wider variety of books and ideas, and give authors an opportunity to get the best editing and cover art in the business. The only requirement: the book has to be good. Good plots, interesting characters, engaging conflicts, well-crafted prose. Write a good book, and people will want to read it.
View all posts by etopiapress →
This entry was posted in Etopia Press, Fantasy, New Releases, Paranormal Romance, Romance and tagged Ally Shields, Cross Keys, elvenrude, paranormal romance, Urban fantasy. Bookmark the permalink.
%d bloggers like this: