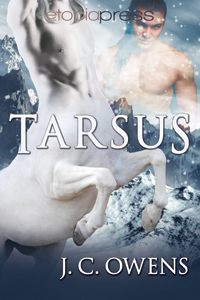 Born into hatred, his odd white coat a source of disgust to his centaur tribe, Tarsus is well used to mockery and contempt. But when he’s kidnapped from his high-blood family by a rival faction, he realizes his torment has only begun. Beaten and sentenced to death, he’s brought before the princess Nalain, heir to the centauran throne. But rather than order his execution, Nalain gives him to her brother, the general Varan, as a servant, a plaything to amuse him before the hideous white centaur’s eventual, inescapable death.

The huge centauran Varan is disgusted with his new servant, yet he soon begins to see the gentle soul that lies beneath the filthy, matted white hide. Even as a captive, the young centaur strives to be of service to all around him, even to those who show him nothing but contempt. Odd, given his bloodline—son to the feared and powerful Shar, whose evil has caused so much suffering for the centaurs of Varan’s tribe. It’s not long before Varan finds himself drawn to Tarsus in ways he never dreamed possible, and the passion that stirs between them becomes something that neither can live without. Until war comes to the centaurs, and with it rumors that Tarsus might not be the guileless servant he seems, and how everything Varan has ever known—his clan, his home, his love for Tarsus—is doomed…

Secrets, madness, lies…and a love forged in the flames of betrayal.

Imprisoned, starved and abused by his captors, Darcel finds his only escape in the depths of madness. But he’s tormented by his own demons, who taunt him with the memories of his past and of his beloved prince, Alasar of Rais. The man who condemned him to this prison for killing the enemy’s high king. The man who betrayed him, when he should have returned a hero. After three years of torment, Darcel is about to give up, to turn himself over to the demon for the blessed release of death. Until he hears the pounding of boots up the prison stairs and finds Alasar in his cell, overjoyed at finally finding him, distraught at his condition, and desperate to save him, with no knowledge of how his friend had come to be there.

After tending his wounds, Alasar transports Darcel back to the palace by sledge, no easy task since it’s deep winter and Darcel is barely alive. But when the enemy raiders attack their party and capture Darcel, it’s clear they seek vengeance for the murder of their king. Until their new king, Harlech, explains that Darcel was not captured, but sold to them. By Alasar.

Caught in a tangled web of secrets, lies, and betrayal, Darcel does not know whom to trust—or whom to serve. With two warring leaders both demanding his loyalty, and both men earning his love, how is Darcel supposed to know what’s real, or where his heart truly lies?

Etopia Press is an electronic publishing house dedicated to readers and authors. We're looking for the best, most unique, most well-crafted stories out there -- and we know they're out there. By taking advantage of emerging electronic markets and media, as well as existing online and print opportunities, we can provide readers with a wider variety of books and ideas, and give authors an opportunity to get the best editing and cover art in the business. The only requirement: the book has to be good. Good plots, interesting characters, engaging conflicts, well-crafted prose. Write a good book, and people will want to read it.
View all posts by etopiapress →
This entry was posted in Etopia Press, Fantasy, M/M Romance, Romance and tagged Betrayal, centaur, J.C. Owens, M/M Romance, Tarsus, young centaur. Bookmark the permalink.
%d bloggers like this: