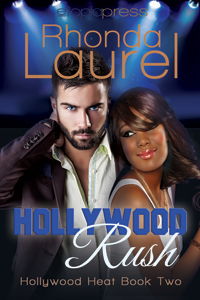 Atlantis Records mogul Kate Garrison is elated to have married her soul mate, actor Chris Cavanaugh, a crazy counterpart to her uptight nature. After a scandalous meeting that set the paparazzi on fire, and a whirlwind courtship and wedding, she and Chris return to their Hollywood life of movie sets and power struggles. She’s busy with the new business ventures she inherited, which include another record label and part ownership of Pinnacle Studios. As she struggles to adjust to her new elite position in Hollywood, not everyone is happy with her new-found power. And in Hollywood, power is something everyone wants a piece of.

Chris Cavanaugh’s luck keeps getting better and better. He married the woman of his dreams and his talent is finally getting recognized. The movie roles and award nominations are pouring in. Now if he could only convince himself that he deserves all the attention. But rumor has it that Kate’s pulling strings behind the scenes to launch her husband to stardom, now that she owns a majority stake in the movie studio. And rumors like that could threaten everything they have…

When technology fulfills every dream, reality becomes a nightmare.

Below the streets of New State, the undergrounders fight to remain free of the technological control of the world above. Every night, Yara risks her life fighting New State’s deadliest weapons, the drones. Half human and half machine, their living half tortured until everything human is gone, the drones have only one objective. Kill. And they do it with exacting precision.

Yara is good at her job and committed to her raids on New State. Until one of those raids brings her face-to-face with Joshua, a New State citizen who doesn’t quite fit her preconceived expectations. After a couple of awkward encounters, he shows her the meaning of hooking up—a computer simulation that allows people to live out their fantasies—without the complication of emotional entanglements or physical reality. But what Yara feels for Joshua is very real. And it’s punishable by law.

As she and Joshua grow closer, she convinces him to leave New State for her underground cause. But as the unrest between New State and the underground escalates, and the drones move in to destroy her world, nothing goes as planned. Families are arrested, loyalties are strained, and Yara’s forced to choose between her people and her feelings. The wrong choice could mean the end of her people, and reality could slip away—forever…

This isn’t the afterlife she expected…

Jen MacLellan can’t get the hang of being a reaper. She’s been separated from Jack, the man she loves, and is stuck with an annoying telepathic link to her ill-tempered mentor, Sam. Now Death is breathing down her neck, promising to remove that annoying link if she gives him what he wants. But when reapers begin to disappear back on earth, leaving behind walking, talking dead people, Jen and Sam are thrust into a dangerous mission to recapture the souls, and a passionate physical relationship that complicates everything.

Jack Norris has no memory prior to waking up on the half-demon Nulcifer’s couch six months earlier. As he begins to investigate his past, he discovers a string of past lives tied together by a beautiful, mysterious brunette. Who is she? And why does finding her seem like a life or death proposition?

When Sam falls victim to fate during a routine visit to earth, Jen’s devastated. Desperate to get him back, she runs smack into the man she never thought she’d see again—Jack. She tries to keep her distance, but there’s no time to be awkward if they want to save Sam. When sinister plots are revealed, and betrayals threaten everything, she’s forced to make some tough choices—and learns that life is just as difficult when you’re dead.

Etopia Press is an electronic publishing house dedicated to readers and authors. We're looking for the best, most unique, most well-crafted stories out there -- and we know they're out there. By taking advantage of emerging electronic markets and media, as well as existing online and print opportunities, we can provide readers with a wider variety of books and ideas, and give authors an opportunity to get the best editing and cover art in the business. The only requirement: the book has to be good. Good plots, interesting characters, engaging conflicts, well-crafted prose. Write a good book, and people will want to read it.
View all posts by etopiapress →
This entry was posted in Contemporary Romance, Etopia Press, New Releases, Paranormal Romance, Urban Fantasy and tagged Hollywood Rush, Interracial Romance, Lisa Acerbo, Nessie Strange, paranormal, Reaper Madness, Remote, Rhonda Laurel, Romance. Bookmark the permalink.
%d bloggers like this: