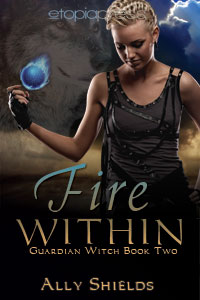 A hidden evil stalks the city…

Ari Calin refuses to believe her human friend Eddie murdered a vampire—in spite of his confession. Her human partner Ryan thinks the case is a slam dunk, even though there’s no weapon and no witnesses, but Ari’s not about to let her friend take the rap without finding out more.

When Ari attends a charity event on the arm of a handsome werewolf, she finds someone she never expected to see again—Andreas De Luca, the charismatic vampire she used to date. When their eyes meet across the room, memories come rushing back. His kiss, his touch, a savage death…and a terrifying magical bond. A reconnection is the last thing she wants. Only by staying away and forgetting Andreas can she hope to avoid the Legend of Ramora.

But when vampires keep dying, one thing becomes clear: Riverdale has a serial killer on its hands, and Andreas could be next. Ari begins to fear there’s more to it, though. Something truly evil is stalking the city, waiting to take control…


Ever wonder what happens after the hero kills the monster?

Daisy Janney just wanted to go to college next year like everybody else—get out of her mom’s house, go to some parties, maybe meet some cute guys. But when she finds out she has to pay for it herself, she has no choice but to get a job. Too bad no one wants her, not even the burger joint. Way to feel like a total loser.

Desperate, she takes the only job she can find—at Calvert Funeral Home. Putting makeup on dead people might not be glamorous, but at least dead people don’t complain. Too bad no one told her they wouldn’t always stay dead. Or that they weren’t always people.

One salt-covered, burnt witch later, Daisy finds herself the recipient of an evil curse. She’s got two weeks to figure out how to break it before she’s scheduled for dismemberment by an angry demon. And she hasn’t even gotten her first paycheck yet. She turns to an old boyfriend for help, but with finals coming up, and some weird guy stalking her who looks like Johnny Cash, she’s not sure there’s enough help on the planet for her kind of trouble…

Etopia Press is an electronic publishing house dedicated to readers and authors. We're looking for the best, most unique, most well-crafted stories out there -- and we know they're out there. By taking advantage of emerging electronic markets and media, as well as existing online and print opportunities, we can provide readers with a wider variety of books and ideas, and give authors an opportunity to get the best editing and cover art in the business. The only requirement: the book has to be good. Good plots, interesting characters, engaging conflicts, well-crafted prose. Write a good book, and people will want to read it.
View all posts by etopiapress →
This entry was posted in Etopia Press, Fantasy, Urban Fantasy and tagged Ally Shields, C.L. Bledsoe, Fire Within, paranormal, The Necro-Files, Urban fantasy, young adult, young adult fantasy. Bookmark the permalink.
%d bloggers like this: