But first, here’s a look at the cover art for Loose Cannon, done by artist Amanda Kelsey. 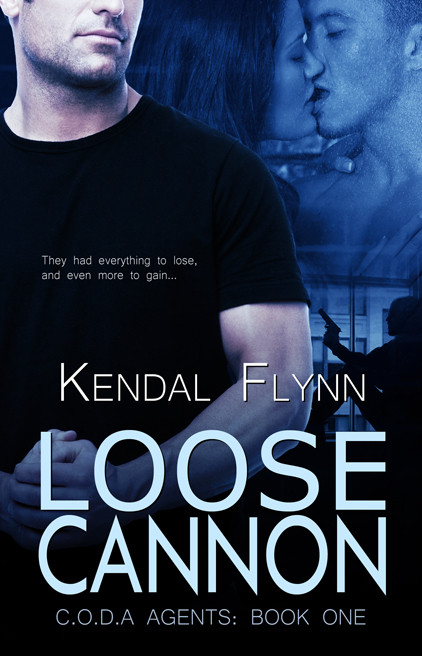 Annie: Welcome, Kendal, thanks for stopping by. Can you tell us a little about Loose Cannon?

Kendal Flynn: Sure! How about action and romance, intrigue and betrayal, gun battles and passion? Raeanne is a covert operative, so she can handle herself, but she’s been out of the life for years. Then Alex, an old flame, shows up and wants to take her into protective custody when enemies from her past come after her again. There’s quite a bit of tension and suspense when two ex-lovers and ex-partners are thrown together again, all in a world of secrets, betrayal, and flying bullets.

Annie: You have not one, but two Chihuahuas. How do you deal with the madness? And do you feel your Chihuahuas are a threat to your tough girl image?

Kendal Flynn: Sometimes it’s a trial. One is sitting curled under my arm as I type on the laptop right now (typos are therefore Not My Fault). As for my image…it takes a tough girl to own tiny dogs with a penchant for fashion. Chickie likes her leopard print coat and Diego loves his “pleather” and sheepskin bomber jacket (hey, it’s cold out there!).

Annie: Ha! They dress better than I do. So how did you become interested in writing action/suspense?

Kendal Flynn: Simple. The genre combines a bunch of my best loves. Men in uniform, military hardware, seat-of-your-pants-action, and romance. The suspense and danger play into the sexual tension, and the growing relationship is shadowed by the threat that it might be destroyed by outside enemies or torn apart by lack of trust. Or that was my intention, anyway.

Annie: Do you believe there’s any wish fulfillment role in fiction? For example, I read your book and immediately wished I could race around fighting bad guys by the side of a hot secret agent…

Kendal Flynn: I think there’s a bit of that in every type of entertainment, to different degrees, from movies to books to…I don’t know…video games. We, as an audience, identify with the heroines and the heroes. We want them to win. We want them to have a happily-ever-after, though they must earn it first. And if any of the bad guys resemble old bosses or ex’es… *wink*

As a writer, I think I have a duty to look into the characters, to see what makes them tick, what parts of them fit together well and which cause conflict, and most of all, explore how they resolve that conflict or fail to resolve it. Honestly, in real life I’d be terrified to be in Raeanne’s position, even though she’s highly skilled and has big, bad Alex Dante by her side.

Annie: How do you balance romantic conflict with plot conflict?

Kendal Flynn: It’s not always easy. The action has to help push them together, and at times, pull them apart. A writer has to carefully balance two arcs, the character arc and the story/suspense arc. Too many quiet, introspective scenes and the tension of the main plot loses steam. Too many rip-roaring shootouts and the characters don’t have enough time to connect, and the reader just gets tired and desensitized and it’s no longer exciting.

Annie: Well, I think you hit the balance perfectly. So what do we have to look forward to in the future?

Kendal Flynn: I’m currently working on the next book in the C.O.D.A. Agents line. It will have just as much high-octane action, and just as much passionate romance, but a little more intrigue.

Kendal Flynn: We’ll start to see what happened in Raeanne and Alex’s past that drove them apart (against their will), because whatever it is (and I’m not tellin’!) that threat has not been contained. The fat lady has not yet sung. Raeanne and Alex are only secondary characters in the next book, but the main characters will be familiar, ones I hope readers will love. Or hate. Or maybe go back and forth over. And that’s all I’m saying. J Oh, and it’ll have more smoking romance, and even more smoking guns (hint hint).

Annie: Hmmmm… Smoking Gun… sounds like a good name for a sequel…

Kendal Flynn: Woops, Chickie and Diego are telling me it’s time for their walk… gotta run! Thanks for having me today!

Annie: Wait! Can we have an excerpt? LOL

Outside the bar, the battered gray Ford crawled by once more. It stopped just outside the open glass doors. The front and back windows slid down and two faces appeared—the driver, wearing aviator shades and a goatee, and a passenger behind him, fat and completely bald with small round glasses. The barrels of two MP5 submachine guns poked out of the windows and pointed straight at Raeanne.

“Get down!” Alex yelled. He dropped the denim jacket concealing his Smith & Wesson and tossed over a cocktail table. A wave of beer and glassware crashed to the grimy linoleum, stunning the place into a momentary hush.

Raeanne dived behind the table. Alex went down beside her and covered her with his body. In one fluid motion, she drew her Glock and pulled back the slide.

The chatter of automatic weapons ripped through the air. Plate glass doors exploded in a ringing crash and bullets bit into the wall beside them. Rounds tore into the padded booths, filling the air with a snowstorm of yellow foam. People screamed and dove for cover, some running, some dropping to the floor where they stood. In front of Raeanne, the thick wooden tabletop shuddered but held against the barrage of 9 mm fire.

The guns fell silent; then came the angry screech of tires. Alex poked his head out from behind the table and raised his pistol. Raeanne came around the other side, holding her own gun in both hands.

She got the passenger window in her sights as the rear end of the gray sedan fishtailed sideways, but a fleeing patron ran across her line of fire. She jerked her weapon up with a curse and watched the car disappear.

Her heart thundered in her chest. Death hadn’t walked so close for a long, long time.

The bartender yelled a few incoherent obscenities, but Raeanne ignored him. She made for the fire exit, keeping as low as possible.

Ahead of her, Alex threw his weight onto the handle and pushed the door open. The harsh clang of the fire alarm blared over the shouting of the patrons, then warbled to silence as he fired a round into the cables. He stuck his head out into the alley and glanced left and right, while Raeanne spun to cover him from possible fire from inside the bar.

Just like she’d done so many times, so long ago. The sense of déjà vu was so powerful it almost broke her concentration. But not quite. Somewhere in her mind she had reached that calm place, the place where she separated from the human element and simply did her job.

Nothing like incoming fire to put you back in business.

“Clear,” Alex said and slipped out the fire door into the alley.

She stayed a step behind him through the narrow alley, her ears still ringing from the roar of gunfire, but her hands were steady on the pebbled grip of the Glock. The air reeked of old garbage and vomit and ammonia. Something in a bag beside the Dumpster had drawn flies, loads of them, humming around it in a pulsing black cloud.

“Follow me.” Alex started running, weaving through mounds of discarded junk. From behind them came the distant wail of sirens.

Raeanne glanced backward, expecting to see a police cruiser. Instead, the gray Ford appeared at the mouth of the alley. One of the submachine guns slid its muzzle from the rear window.

He spun back and raised his .45. Gunshots exploded around them– everyone’s– echoing along the narrow alley. The barrel of the submachine gun jerked, then dropped from sight. Raeanne aimed and fired again, and the pistol jumped in her hand. Her shot blew out the driver’s side mirror as the car fishtailed away from the alley entrance.

She knelt to locate the spent shell casings, found them, and swept the hot brass gingerly into the breast pocket of her plaid shirt.

Alex grabbed her arm and pulled her to her feet. “Hurry up. We need to get out of here if we expect to get your son before they do.”

A jolt of adrenaline pulled her out of the calm place and twisted in her gut. This was nothing like the old days. This time, she had a son.

Etopia Press is an electronic publishing house dedicated to readers and authors. We're looking for the best, most unique, most well-crafted stories out there -- and we know they're out there. By taking advantage of emerging electronic markets and media, as well as existing online and print opportunities, we can provide readers with a wider variety of books and ideas, and give authors an opportunity to get the best editing and cover art in the business. The only requirement: the book has to be good. Good plots, interesting characters, engaging conflicts, well-crafted prose. Write a good book, and people will want to read it.
View all posts by etopiapress →
This entry was posted in Etopia Press and tagged Etopia Press, Kendal Flynn, Romantic Suspense, Upcoming Releases. Bookmark the permalink.